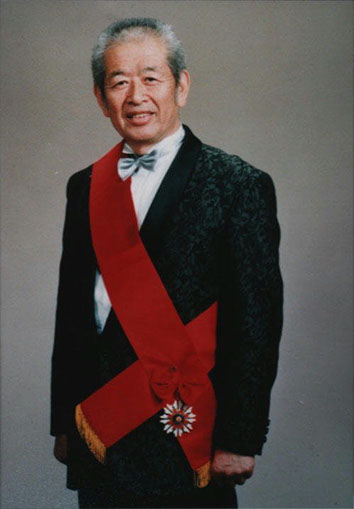 Later he changed his name to Masaaki.

He was taught from his father in Kendo when he was just seven years old and over and above he learned Judo and Karate.

At high school he was a gymnast, boxer and leader of a football team. He also learned different social dances, which, according to his statements, helped him to develop his Taijutsu body movements.

In the school afterwards he practiced also boxing and Judo and his was a member of the Judo and theater union.

He studied Theatrical Sciences at the Meiji university in Tokyo where he later achieved his Doctor title.

During his medical studies, he got the 4.Dan in Judo. He was asked if he wanted to teach Judo to American soldiers in Yokata Army Base, and he accepted this suggestion. He was just 20 years old and realized that the "big" Americans had physical abilities and that they learnt in a little time, those things, which a typical Japanese needed many years. After this discovering, he started to think about his training in Budo:

How good where the martial arts really, when a big and heavy person could win you easily?

Hatsumi started to search for the true martial arts tradition.

He paid monthly a teacher in Kobudo 300.000 Yen, so that he was let educate at his home and be taught in Kobujutsu Jûhappan(the 18 parts of Kobujutsu). He graduated after 3 years of training.

In 1957 (Showa 31), when he was 26 years old he met for first time Takamatsu Toshitsugu, in Kashiwabara in the west area of Iga. He traveled for 15 years every weekend, going across the Honshu islands, so that he could be taught from his teacher. The simple trip from Hatsumi's home in Noda to Kashiwabara, Takamatsu's staying place, lasted about the half day.

A few years before he decided that Hatsumi would become his successor in the following 9. traditions (RYU-HA):

Sensei Hatsumi is the last Grandmaster of Ninjutsu, who has own in all 9. Bujinkan traditions the Soke title.

Soke Hatsumi developed a system, so that the different sides of the different schools could be taught together. He named this system BUJINKAN DOJO (Bujinkan Dojo = Place of the God of war), and the form of teaching BUJINKAN NINPO TAIJUTSU.

politicians and country leaders and he is also has got a lot of awards for his contributions.